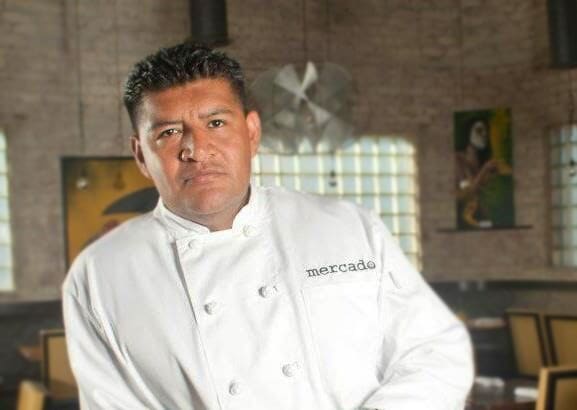 Jose Acevedo, of the Cocinas y Calaveras restaurant group, is one of the most acclaimed chefs working in Southern California today. He has built up quite a following among diners and critics since his days training in the kitchens of Wolfgang Puck and Hillstone and running the kitchen at Taleo Grill. His signature flan has been praised as “best in the universe” by Gustavo Arellano, fans of his carnitas say they are the best they’ve ever had in a restaurant, and LA Weekly proclaimed Maradentro to be “changing Mexican seafood.”

Since 2010, Chef Acevedo has been working with his longtime friend Jess Gomez to expand the burgeoning Cocinas y Calaveras empire of restaurants, starting with Yxta Cocina Mexicana. Chef Acevedo created menu items and specials at Yxta that formed the basis for the concept of Mercado, which has now grown to four locations around Los Angeles with a fifth on the way in Pasadena. In 2016 the afore-mentioned Maradentro brought Chef Acevedo’s passion for seafood to Brentwood.

Chef Acevedo has been a lifelong seafood devotee who comes to the traditional aspects of his culinary style naturally. Growing up in Guanajuato, Mexico, he would go fishing and cook the fish on the beach. His favorite dish to cook at home is Caldo de 7 Mares, while he also has a soft spot for getting fresh Dungeness Crab at the pier in San Francisco. He credits his handsome Santa Monica Seafood rep, William Reyes, with being a great problem solver who is always professional and nice. If you’re cooking at home, Chef Acevedo’s advice is to always start with the freshest seafood you possibly can!