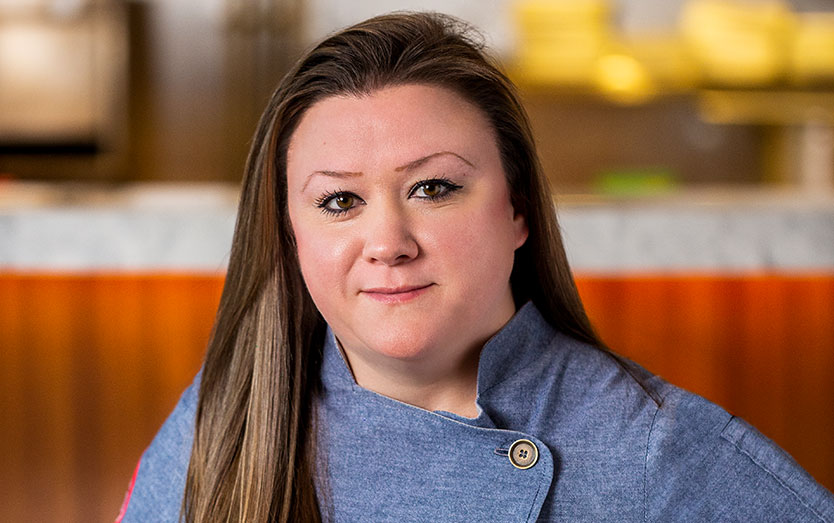 As Executive Chef of Brezza, located strip-side at the newest mega-resort and casino, Resorts World, in the heart of Las Vegas, Chef Nicole Brisson is at the helm of the kitchen, providing her signature authentic, yet modern coastal Italian cuisine to locals and visitors alike. A testament to her dedication to excellent quality standards and leadership techniques, she partnered with highly esteemed restaurant operator Jason Rocheleau for this venture. Together, they have assembled a pantheon of talent to join them, including some of the most acclaimed food & beverage industry professionals from across the country.

Originally from Rensselaerville, NY, Chef Brisson was born into a culinary-driven family beginning with her grandfather, who owned a restaurant in Saratoga, NY that her mother grew up working in, successively preparing all of the household meals from scratch. Brisson watched her mom utilize all of the produce from their garden, as well as the neighboring farms at the foothills of the Catskill Mountains, and she and her siblings would help with the canning process all summer to get them through the brutal upstate winters. From a very young age, she knew the kitchen was where she was meant to be and began her career in a local farm-to-table restaurant at just 15 years old.

Upon turning 21, Chef Brisson had already completed her culinary degrees at Schoharie Vocational School at Johnson & Wales University, and promptly moved to Italy to study under several of the best chefs in South-Central Europe including Fabio Picchi at Cibrèo in Florence and the incomparable Chef Dario Cecchini’s butcher shop, Antica Macelleria Cecchini, located in the Chianti region of Tuscany; an experience that further ignited her love and respect for Italian cuisine, as well as the art of fine butchering, curing and honing her understanding of the aging process.

An opportunity to move to Las Vegas, NV in 2005 to open Wynn Las Vegas brought Chef Brisson back to the states and she continued to learn and grow in the luxurious AAA 5 Diamond & Mobil 5 Star resorts’ top-rated Italian restaurants including Stephen Kalt’s Corsa Cucina and Paul Bartolotta’s Bartolotta Ristorante di Mare. Batali & Bastianich Hospitality Group offered her the Chef di Cucina position at Enoteca San Marco, which moved her next door to The Venetian Resort, where she stayed for several years working throughout their portfolio of concepts and eventually being appointed as Culinary Director of all B&B Las Vegas operations overseeing OTTO Enoteca, B&B Ristorante, B&B Burgers & Beer, CarneVino and the group’s massive dry-aging facility located offsite that brought in 10,000 pounds of beef a week, aging it far longer than anywhere else in town and among the longest times in the nation. In 2018, Chef Brisson was named the first female chef of Eataly in the U.S. upon opening the Las Vegas location, as well as the first chef appointed to the Southern Nevada Health District’s Board of Directors.

With a desire to explore a career off-Strip, Chef Brisson opened Locale Italian Kitchen in southwest Las Vegas as Executive Chef & Partner, featuring cuisine in both “La Cucina Povera” and elevated American-Italian styles with ingredients sourced from small domestic farms and several delivered straight from Italy. This venture made a significant splash in the local restaurant community and secured her reputation as one of the most beloved culinary leaders in Sin City.

The COVID-19 pandemic brought upon more changes for Chef Brisson. She used the time wisely traveling to San José del Cabo on the southern tip of Mexico’s Baja California peninsula to provide culinary consulting services for the exclusive private resort El Dorado Golf & Beach Club by Discovery Land Company, menu consulting for several local Vegas restaurants, as well as working in SBE’s Los Angeles Test Kitchen, where she developed multiple concepts for Dario Cecchini ahead of their arrival to the states.

Over the years, Chef Brisson has won multiple accolades including Eater’s 2021 “Restaurant of the Year,” Food & Wine’s “Best Steak in the US” award for CarneVino, Desert Companion’s “Best Chef” award recipient, the National Restaurant Association’s “Best New Restaurant” award, VEGAS INC.’s 40 under 40, Wine Spectator’s coveted Award of Excellence, and she was nominated as a semifinalist for the 2020 James Beard Best Chef: Southwest Award. She has competed and appeared on several popular reality TV shows, including “Chopped,” “Late Night Chef Fight,” Action Bronson’s “MUNCHIES,” “Beat Bobby Flay,” among others.

Chef Brisson remains dedicated to her craft and committed to keeping it simple, constantly sourcing seasonal, sustainable ingredients, and serves as a respected member of organizations such as Three Square Food Bank’s Culinary Board and the Slow Food Executive Board.

On the heels of opening Brezza on June 24, 2021, Chef Brisson recently opened another concept, Bar Zazu, which debuted at the resort in December 2021. The menu changes from day to night, featuring a European-style quick-service cafe ambiance for breakfast and lunch, then transitioning to a lively full-service restaurant and lounge in the evening with tapas, a curated wine and cocktail program, and incredible audio/video elements within a whimsical space unlike any other.