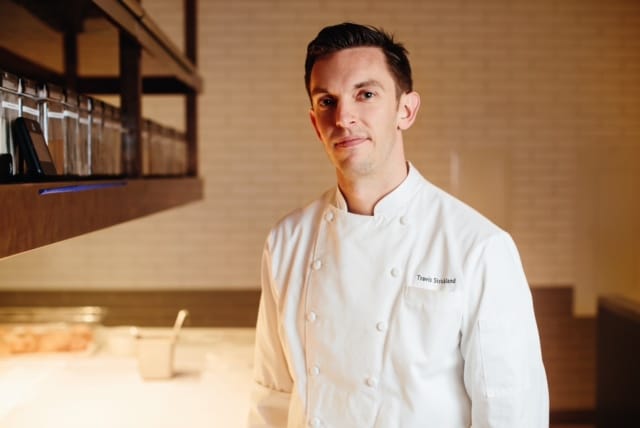 Marking his first foray into the L.A. dining scene at Baltaire, Travis Strickland has crafted a contemporary menu that redefines the traditional steakhouse. Upon graduating from the Culinary Institute of America, Strickland cooked at the legendary Blackberry Farm in Walland, TN, where he worked closely with products picked daily by hand, enabling him to foster an understanding of locally-grown food and how to build intriguing flavor profiles out of the purest ingredients.

Prior to making the move to Los Angeles, the Midwest native worked in some of Chicago’s most recognized steakhouses, notably as the corporate Executive Chef for Chicago Cut Steakhouse and Executive Chef of its sister restaurant, The Local Chicago.  Joining the Baltaire team has allowed him to subtly push the limits by creating a menu that showcases classic steakhouse cuisine balanced with global influences.

One of Chef Strickland’s favorite seafood dishes at Baltaire is the table-side served Dover Sole, “I think we are probably best known for our European Dover sole. I like the skill and precision that it takes to cook this fish properly, and how it is quite mild and accepting of other flavors that you bring to it. We also fillet it tableside in front of the guest in beautiful French copper pans and pair it with local market vegetables. It’s been a signature since day one.”

On working with Santa Monica Seafood the Chef had these thoughts, “Since moving to LA, I’ve worked very closely with Michael Cigliano and Phil Levy as we concepted Baltaire. They were a great help in showing me the new things available to me being out here and have been a great partner for us during our opening.”

When not in the kitchen, the Bel Air resident is an avid runner and cyclist, and even co-founded his alma mater’s annual 5K “Run for Their Knives” event, benefiting a memorial scholarship fund that promotes health and well-being in the culinary community.