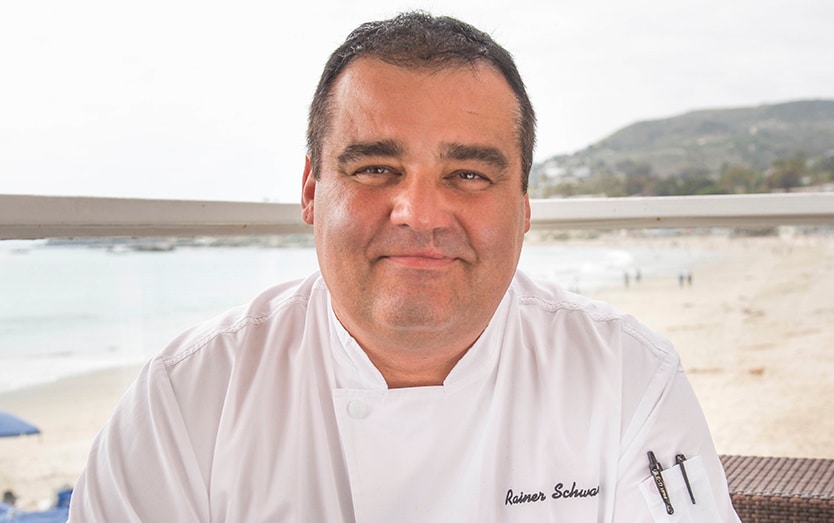 Restaurateur & Chef Rainer Schwarz combines a rich cultural past with the finest culinary training to present menus unlike any other found in the region. His style of cooking focuses on simplicity by using only the best possible high-quality, seasonal ingredients. One of his passions is to pair each dish on his menu with the best possible wine selection.

The exquisite flavor and unsurpassed quality of each dish prepared by Chef Rainer demonstrate his extensive training and expertise in fine dining. Born in the small Austrian town of Klagenfurt, Chef Rainer grew up with seafood and even did his culinary training at one of the best seafood restaurants in Europe. At the age of 15, he had a four-year apprenticeship in an old Austrian castle converted into a restaurant. Upon completion, Chef Rainer traveled to Switzerland, Germany, and France working in various five-star hotels and restaurants.

Chef Rainer’s next venture was the Grand National Hotel in Lucerne, Switzerland, where he was the Chef de Cuisine for Von Pfyffer, one of the top restaurants in Switzerland. It was then that he met Chef Joachim Splichal, who became his mentor. He left Europe to work with Splichal at Highland Inn in Carmel, and at Los Angeles’ famed Patina & Pinot restaurants.

From the unique and exceptional experience he obtained while working with Splichal, Chef Rainer was able to launch a culinary career in the States, which began with the opening of his own restaurant, Cienega, formerly L’Ermitage. During this time, Chef Rainer found the perfect fit with the new Mondavi project to take part in their California adventure.

Following the events of September 11th and the subsequent closure of the Mondavi Project, Chef Rainer moved to Colorado to serve as Food & Beverage Director at the Vail Cascade, a 300-room luxury ski hotel & spa in Vail. Together, with three of the resort’s executive committee members, Chef Rainer created several Bistros and Pubs in the Denver area, where he is still involved with projects. In 2009, Chef Rainer returned to LA to become Executive Chef at the Roosevelt Hotel in Hollywood, where he would launch Public Kitchen & Bar.

The experience led him to join the Sentinel Development Group, a national development, and development management services company. In 2013, Chef Rainer formed the Sentinel Restaurant and Hospitality Group (SRHG), an in-house operation for the management of restaurants and hospitality venues, with Partners, restaurant industry veterans, Colby Durnin and John Nye. Together, the executive team brings more than 60 years of combined culinary and operational experience to SRHG, including opening 75 restaurants combined.

When it comes to selecting seafood, Chef Rainer said that he looks for the best quality just like everyone else. He also mentioned that since his restaurants are so close to the Pacific Ocean, it is very important to him that he purchase his seafood right – meaning seasonably sustainable and at the right price.