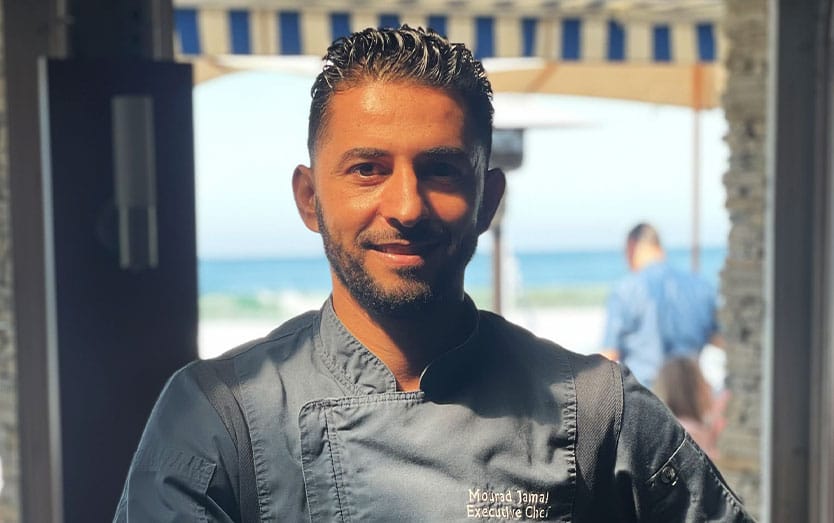 “The Poseidon is the place where is the health & happiness of our team and guests were the heart of every decision and recipe”: Chef Jamal said.

Now a proud American, Chef Mourad Jamal’s journey started far away in his native country of Morocco. Cooking for him began as a necessity to help out when his mother and family were working. It has since transformed into a passion and career. Between 2001 and 2005, he completed a Bachelor’s in French Literature at Mohammed 1st University in Oujda city, Morocco, and a Bachelors in Food and Tourism Management at the Superior Institute of Tourism and Hotels in Mohammedia city, Morocco. He went on to receive additional training through a year-long apprenticeship in Southern France. This allowed him to practice and master classic French and Mediterranean cuisine techniques. Once back in Morocco, he was recruited into an intensive International Chef Trainee program through Disney World Orlando. Working under Chef Anette Grecchi at one of Disney’s top restaurants, Jiko’s Animal Kingdom Lodge, Chef Jamal finished his program in 2006 and was awarded Top Chef out of a variety of different countries that were represented. He went on to assist a close friend in re-opening Scholars Inn Gourmet Cafe in Indiana which soon became the Best New Restaurant and Best Upscale Restaurant in town. After getting the relaunch completed, he sought out the mild Southern California weather and headed west. Since living in San Diego, Chef Jamal spent a short time at another nearby restaurant, Sunset Bar and Grill before joining the Poseidon team in 2009. He brings a fire to the whole restaurant through his never-ending energy and ability to produce delicious meals for all that stop through. His California fusion style incorporates flavor influences from his travels around the world to France, Morocco, Belgium, Mexico, the Caribbean, and the Netherlands. He focuses on the use of high-quality farm-to-table ingredients from local sources as well as fresh sustainable seafood. He credits much of his success to the supportive training under Chefs: Anette Grecchi, Justin Hoen, and Jake Brenchley.

Chef Jamal thrives on creating an environment of happiness and health for his employees and guests and is regularly seen interacting throughout the restaurant.

Today, you will find him working alongside his team creating the many delicious dishes we have all come to love. Chef Jamal has infused flavors from his global traveling into his dishes at the delicatessen. His cooking style is innovative and from the heart, and explores the modern variation of coastal cuisine. He always prefers cooking with fresh, seasonal ingredients, which utilize fresh herbs, quality olive oil, and sustainable seafood.

Chef Jamal stated that when it comes to seafood, he looks for where the product is sourced. Sustainability is very important to him alongside quality. “I will never compromise quality for a lower price,” he said.

One piece of advice Chef Jamal would like to share regarding cooking seafood is to keep it simple. If you purchase from a reputable seafood company that offers quality fish and shellfish, then salt and a squeeze of lemon are all you need to cook your seafood.