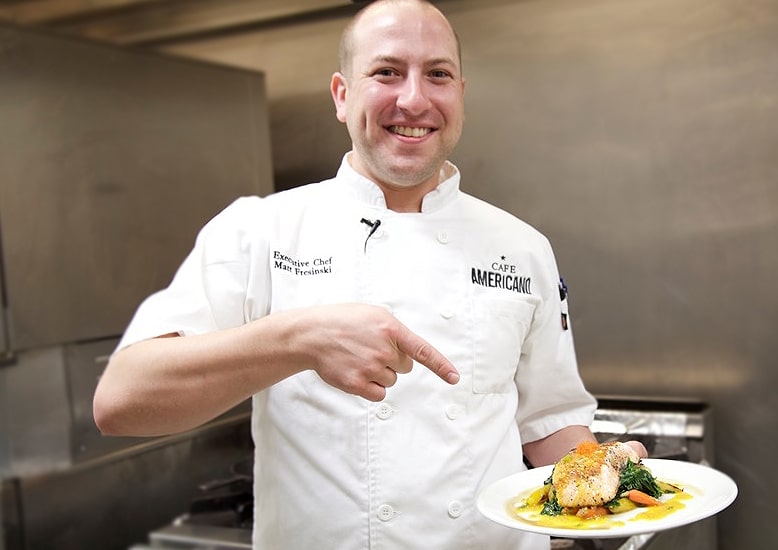 As a child, Executive Chef Matt Fresinski would go fishing with his grandfather in upstate New York visiting his “secret” fishing spots. Although they never caught as many as they would have liked, when they did, it was always extremely exciting.

At the age of 13, Chef Fresinski knew that he wanted to become a chef when he grew up.  He offered to work for free in many kitchens just to gain experience.  When Chef Fresinski was out of school, he attended the Culinary Institute of America in Hyde Park, New York and interned from the East Coast all the way to Las Vegas in 2001 to work at Aureole.  After graduating, he continued on to work for many restaurants on the strip, opening 14 different locations including Gordon Biersch, Society Café and Buddy V’s. His latest (and greatest) is Café Americano at the Caesars Palace in the former space of Central. Fresinski is truly passionate about this restaurant because he’s able to use his own creativity (which he has a lot of!) on about 75% of the menu.  From breakfast being served all day to the “skinny menu” with five items less than 500 calories!  Those not watching their calories will want to indulge in the Mile High Dutch Chocolate Layer Cake topped with chocolate sauce and cocoa whipped cream; or the Krispy Kreme Bread Pudding created from the favored donuts, brioche and rum soaked golden raisins… YUMM!

Chef Fresinski is also excited about two great items that he’s soon adding to the menu (if not already on the menu!) – Salmon and Ahi Tuna from Santa Monica Seafood! He loves salmon so much that he even cooks it at home when he’s not at work. Another great product Fresinski loves is succulent and buttery sablefish. “I always jump on it when it’s available!”  A wonderful cooking recommendation that he suggest is, “Keep it simple, focus on the technique of cooking the fish properly; a nice sear and a little salt and pepper go a long way.”  – We agree 100%!