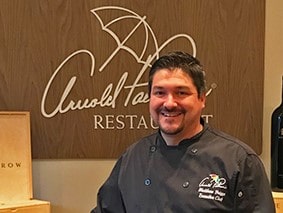 Chef Matt Briggs is preparing for his second season as Executive Chef at Arnold Palmer’s in La Quinta, CA, continuing his nearly two decades of focusing on high-quality locally-sourced ingredients in the kitchen. A graduate of the Scottsdale Culinary Institute, Chef Matt plied his trade prior to Arnold Palmer’s at Ocean Prime Seafood in Beverly Hills. Before that he made stops with Mastro’s, Phoenician Resort in Scottsdale, AZ, The Diamond Club at Chase Field in Phoenix, and The Loft at Montage Laguna Beach.

Chef Matt grew up in the shadow of the Sierra Nevada Mountains in Nevada catching rainbow trout (“brookies”) with his brother, their father and their grandfather. It was there that he first learned to clean and cook fish and the pleasure of simply prepared fresh fish. His palette may have evolved but there is still no replacement for straightforward presentation. Time spent cooking on the coast of Oregon has lead Chef Matt to a deep appreciation for the trout’s close cousin the salmon. The variety of species and the versatility of the fish makes salmon his personal favorite.

A family man through and through, Matt now enjoys his off-time around La Quinta golfing, hiking, or camping with his wife and their two daughters. Dine like a king at Arnold Palmer’s with Chef Matt’s favorites like pan roasted salmon, served with marble pee wee potatoes and asparagus, or picatta-style halibut.