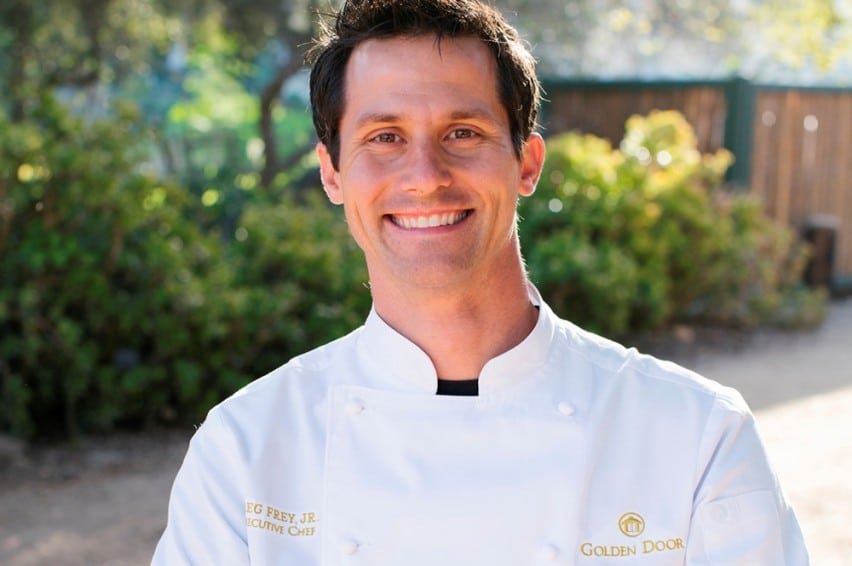 Chef Greg Frey Jr. has always loved to cook but says being a chef was never really something he thought about as a child. However, his family is quick to remind him that early on his world was already revolving around food.  “My family use to travel to Italy often when I was a kid and I couldn’t wait each time to get some whelks; I love the small ones called periwinkles. I would sit there and demolish a huge bowl every time.”

Chef Frey’s parents were both employed by TWA; his father a pilot and mother a flight attendant. They both flew international and the best way to spend time with their children was to bring them along. Before Chef Frey was old enough to realize it, he had already been exposed to many cultures and their food. He loved to help in the kitchen and play with the spice cabinet. On Saturday mornings, while most kids were watching cartoons, Chef Frey was watching food shows like Great Chefs of the World.

As a ten year old on his first Boy Scout camping trip, he remembers being shocked to see bacon tossed into a tall pot clearly made for boiling water—not a frying pan or a beautifully seasoned cast iron skillet. Telling the troop leaders they were doing it wrong which eventually made them start over. At thirteen, he wanted to be an aerospace engineer, but after two years of school he knew it would not be his career after all. His first job, at 15, was as a busboy/host in a local “mom and pop” restaurant. After that, he never left restaurant work. Even during engineering school he worked at a local microbrewery as a bartender. It was here that his interest in cooking grew and he realized he was good at it. Shortly thereafter, he made the transition to culinary school.

Chef Frey attended Johnson and Wales in Charleston, SC and while there, landed a job as host at the best restaurant in Charleston. He made it to front waiter all the while banging on the chef’s door to let him become a cook. With the endorsement of the sous chef and his father calling to plead his case, Chef Frey was eventually set up with a cooking job at a new country club. His rise through the ranks was thanks to the tough love and tutelage of Chef Bob Wagner and Michelle Weaver and eventually earned him a trip to Stage in France at Le Bougainvillier in St Galmier. After returning to the states, he worked at Rubicon in San Francisco before making the move to Bernardus Lodge in Carmel Valley to work with a longtime friend. This would become a place of major influence on his career. He took the position of Chef de Cuisine at Bernardus Lodge in spent almost 2 years working for Chef Cal in the salad bowl of the United States and it was here where he truly learned how to cook from the farm.

While working at Bernardus, he met his wife and they decided to move to San Diego. Leaving their comfy home in Monterey to live on a boat in San Diego harbor, they had no jobs and no connections; but after some searching, Chef Frey landed an executive sous chef position at Pamplemousse Grille with Chef Jeffery Strauss. It was the best introduction to the San Diego culinary sphere any chef can have. In 2011, Chef Frey became chef de cuisine at La Costa resort’s Bluefire Grill. He spent three years there developing his style of freshness as well as teaching himself a new passion—beekeeping.

At home Chef Frey says that he eats seafood often and a simple grilled fish with lemon and parsley with a little great olive oil is preferred. One of his favorite is clams and mussels steamed with white wine and parsley over pasta.

“Seafood is my favorite protein to cook and there is no way I could pick a favorite. The need to use finesse in one’s approach is what makes seafood so appealing to me. Many people can grill a steak with good consistent results but seafood demands a focus on one’s technique and knowledge of the ingredient to be consistently terrific.”

“My contact has been Ejay Maruna for the last 14 years. Every time I ask him for special items or delicacy from around the world, he always finds a way to get it to my restaurant, even with short notice – a big reason why my loyalty stays with Santa Monica Seafood. A big THANK YOU to all at Santa Monica Seafood. You all are the best!”