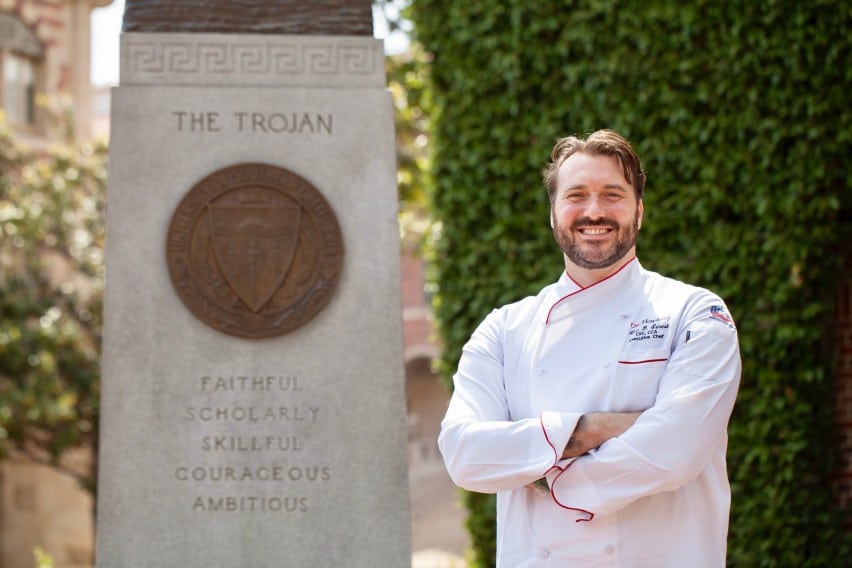 Chef Eric Ernest, the Executive Chef of USC Hospitality, has spent a lifetime learning to execute his culinary vision. Not only does he have a degree in Culinary Arts & Hospitality Management and a CEIP degree from the Culinary Institute of America, he grew up in the restaurant world under the watchful eyes of his father and his grandfather in Milwaukee, WI.

Before coming to USC he spent time as an Executive Chef for some of the most well-regarded restaurant groups in the world – SBE, the Royale Group, Innovative Dining – as well as at the world-renowned Citrine in Hollywood. He developed his strong foundation in traditional French techniques at Grenadier’s Restaurant before going on to work his way up in the kitchen under the tutelage of chefs Wolfgang Puck, Lee Hefter, and Yoshi Kojima.

Through his favorite pastime of scuba diving, Chef Eric has learned to more fully appreciate the seafood that he cooks. He recognizes the oceans as unique and special places and works very hard to show appreciation and respect for the species that he presents. He has traveled to more than 25 countries and his unique cuisine is a mouthwatering representation of his travels, creating new memories for all who taste it!