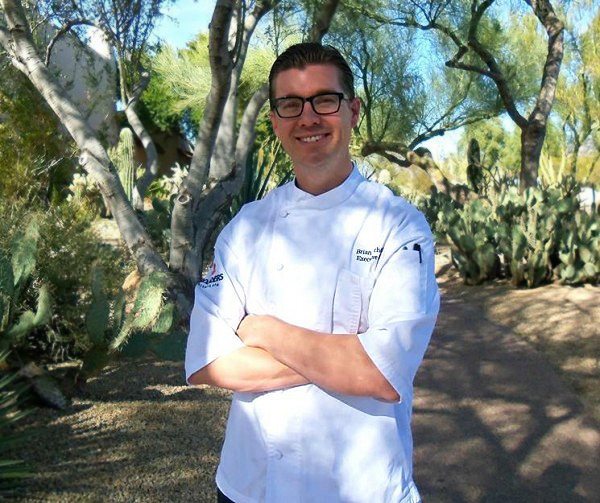 A native of Phoenix, Chef Brian Archibald’s love affair with food dates back to his early childhood. He remembers “camping and fishing with my dad we used to smoke our catch after the first night’s dinner.” While growing up, working in the kitchen with his mom and training in his high school’s culinary arts program ignited his passion for cooking. He landed a scholarship to attend the legendary California Culinary Academy in San Francisco where he realized the superior taste of ingredients picked fresh from the garden.

Archibald is an “ingredients-driven chef”, who has developed a distinctive style that he describes as “a blend of Mediterranean cuisine and Southwestern influences”. He recalls his first trip to the Mediterranean, when he visited the Bouceria Market in Barcelona. “I met a fisherman who took us to this tiny market [where] the locals would bring their own daily catch to sell. It was amazing…it gave me a greater appreciation for how diverse the offerings of the sea can be around the world and how much it was celebrated in this country!”

Chef Archibald’s eclectic background encompasses cooking with many of the top toque chefs, including New York’s legendary Chef Daniel Boulud, as well as cooking at the famed James Beard House. Most recently, Archibald won the Food Network’s Beat Bobby Flay Competition, aired nationally in February 2016. In addition to his triumph on television, Chef Brian Archibald has won the heart and admiration of his many customers.

Chef Archibald currently resides in Scottsdale with his three daughters, Vittoria, Ava and Mia. While at home, he enjoys grilling oysters; “typically, we cook outside when I’m not in the kitchens at work. I love how simple a beautiful oyster over an open fire can create such deep flavors of the sea.” Another “favorite fish to cook is Skate wing; I love the texture and versatility.”