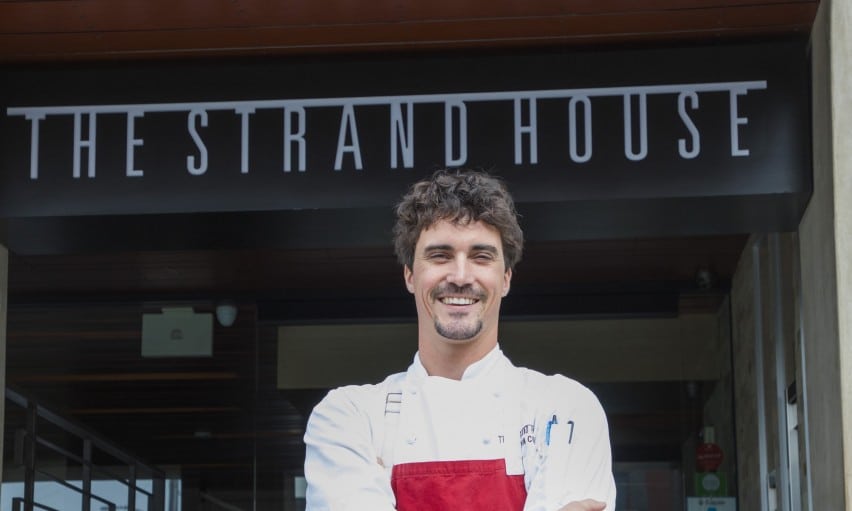 A South Bay local, avid surfer, baseball player and potter, Executive Chef Austin Cobb has plenty of talents and interests. Cobb is particularly passionate about fish; “it’s light and healthy, and takes a delicate touch to make it delicious.” He remembers at just eight years old, “I went fishing in Santa Cruz and caught a Halibut almost as big as myself. It blew my mind!” Flash forward to Redondo Beach’s Chez Mélange, where Cobb began his culinary career before moving to Italy to work at Michelin-starred restaurant, Marenna. These early experiences significantly impacted Cobb, and solidified his passion for cooking while instilling discipline and a drive for excellence.

Upon returning to LA, Cobb became the personal chef for Will and Jada Pinkett-Smith. He was then introduced to Top Chef Master Neal Fraser and offered work at his top LA restaurant, Grace. In 2011, Cobb joined Fraser to help open The Strand House. With the introduction of The Strand House Culinary Master’s Program, he collaborated alongside several of the country’s most notable chefs. Cobb then left with Fraser to be Executive Sous Chef at the critically acclaimed Redbird before re-joining The Strand House as Executive Chef.

Cobb’s New-American, free style way of cooking blends inspiration from cuisines all around the world. He brings healthy, flavorful food with a seasonal emphasis to The Strand House guests. When cooking fish, Cobb advises to “cut with a sharp knife dedicated for fish and make sure you handle it with gentle, loving care.” Along with Cobb’s strong pedigree and extensive training, he demonstrates an exemplary work ethic dedicated to using the freshest seasonal ingredients and upholding a fine quality of dining.